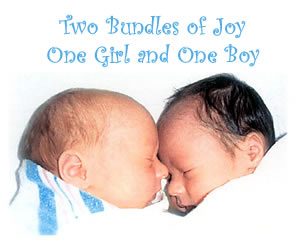 "Since I have you here, I will try to express my feelings. It seems silly because sending you a "thank you" note seems so petty for what you have done. Words can not even begin to express the extreme gratitude that we have for you. After a decade of infertility and 12 failed pregnancies we have had so much heartache and loss. I truly became to believe that being a parent was not in the stars for us. Then, we met you. You changed our lives. I literally have tears on my cheeks as I write this. You will never truly realize the full impact of what you do for people. You are able to bring women together that want to help other women realize the ultimate reward of womanhood - being a mother. You help form little lives that are truly miracles. When I look at our daughter and think of all of the orchestration that went into bringing her here, how many people helped and were involved, it is truly unbelievable. Thank you a million times over!!" (JQ, Michigan)

Two days before my 23rd birthday I donated 26 eggs to a couple I don’t know and will never know. "But why?" As a donor, I wish I was better prepared to answer this question because describing your willingness to "sell" a piece of you is tough.

Are your donors pre-screened?
Our donors have all spent at least 2 hours of intense interview time with us in addition to psychological testing. When we bring a candidate to you they are completely ready to be matched and able to continue on with the medical portion of the program.

The remaining three women in the study became pregnant with the help of fertility treatments. For two of these women, the treatments were needed due to fertility problems in their male partner.

Women who donate eggs are treated with hormones that ramp up their ovaries' egg production, and previous studies had suggested that fertility problems might follow in the wake of these hormone treatments, according to the study. However, these previous studies had flaws in their design, so a more robust look at the issue was needed.

The question of how egg donation may affect future fertility is important not only for those who donate eggs to others, but also for women considering freezing their eggs to delay childbearing, the researchers said.

There were limitations to the study, the researchers said. Egg donors are a select group of women — women with fertility problems are unlikely to be able to participate. Further, while the findings suggest that women's fertility after donating eggs is unaffected in the short-term, longer-term studies are needed to look at the possibility that the ovaries of these women age faster than usual, the researchers wrote.

The researchers noted that there is some evidence that the egg donation procedure, which involves puncturing the ovary, may cause the immune system to produce anti-ovary antibodies, and that higher levels of these antibodies have been seen in infertile women. Still, other studies have suggested that increase does not affect egg production, the researchers said.

The researchers noted that 16 percent of the women in the study reported changes in their menstrual cycle after egg donation, although none of these women reported fertility problems.

The study was published online March 29 in the journal Fertility and Sterility.

Pass it on: Egg donation does not harm a woman's chances of later becoming pregnant, a new study finds.